by Guy Timberlake, CVO and Founding Partner, Government Contractors / Saturday, January 28, 2017 / Published in Business Resources, Federal Contracting, Getting Started, Guy Timberlake, Small Business
Over the years I’ve done a number of comparisons assessing the economic impact of federal contracting dollars on small business concerns by looking at the procurement methods and the types of contracts used by federal civilian, defense and intelligence agencies. This is one of those.

My approach is to observe how many small companies received obligations at a certain dollar level during a specific fiscal year and analyze the information based on solicitation procedures, award type and more. For example, I compare dollars getting to small business via indefinite delivery vehicles (IDVs) versus standalone contracts and when established contract vehicles are used, I measure the result of single award versus multiple award contracts. As always, I give a nod to FAR Part 13 buys to continue spotlighting this still great opportunity for American Small Businesses to get a foot in the door or better, push the door open even wider.

If you work for or lead a company pursuing federal sector opportunities and your role requires understanding various factors that will impact your ability to conduct effective Marketing, Business Development, Capture and Proposal Management, you’ll find this useful. Sound good? Okay, here we go!

For some reading this, $500,000 would be a game-changer and for others it’s more of a nice-to-have, part of the collection that ultimately gets them where they want to be. Either way, a win is a win and this piece examines how that happened for small federal contractors during the Government’s 2016 fiscal year, and if you read between the lines, how much of it will happen in FY2017. When I previously penned comparisons of Simplified Acquisition spending to dollars obligated against the Federal Supply Schedule at the $500K and $250K levels, I discovered that small businesses should really consider ‘vehicle selection’ based on their customer set, offerings and more because the ‘hype’ espoused by many different elements is not always reality. Specifically, not all dollars spent by agencies are attached to contract vehicles, and not all dollars attached to contract vehicles are subject to ‘Multiple Award Fair Opportunity’ since single award contracts are still very prevalent and relevant.

In this piece the threshold is small business concerns awarded $500K or more in obligations in FY16. To make the list, a small business needs to have accrued the obligations in one or more transactions via one of the award types or solicitation procedures. It’s important to note I’m looking at gross vs. net obligations in this analysis. This means I’m not considering deobligations by agencies as part of my query.

The number of small business concerns capturing $500,000 or more in FY16 obligations is:

These companies sank their teeth into a bucket of federal agency (gross) obligations valued at:

which is a per company average of:

That ain’t too shabby! Here comes the detail.

When agencies issued obligations to agreements, contracts and orders, here’s what it looks like. This might not mean much to some (or many) but it paints a pretty clear picture of how these dollars moved. For example, over one-third of the obligations were made to standalone contracts, that is, purchases made where there is no reference to an established contract vehicle. To be specific, the dollars associated to ‘Definitive Contracts’ and ‘Purchase Orders’ are the one’s to which I’m referring. 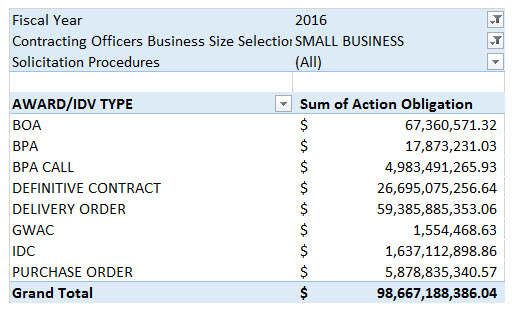 For the instruments above that are indefinite delivery vehicles (BOA, BPA, GWAC and IDC), the obligation amounts corresponding to these IDV’s reflects single award IDV’s for the BOA, BPA and IDC. For GWAC dollars (and some of the IDC dollars) the obligation amounts represents the guaranteed minimums for companies on those contracts. Notice anything missing from the list of IDV’s? How about the Federal Supply Schedule (aka the GSA and VA Schedules)? Since these are exclusively multiple-award vehicles with no minimums paid to vendors, there are not obligations to the IDV Type ‘FSS.’ To get a look at how these impact the dollars above we need to add in one additional attribute to the query. 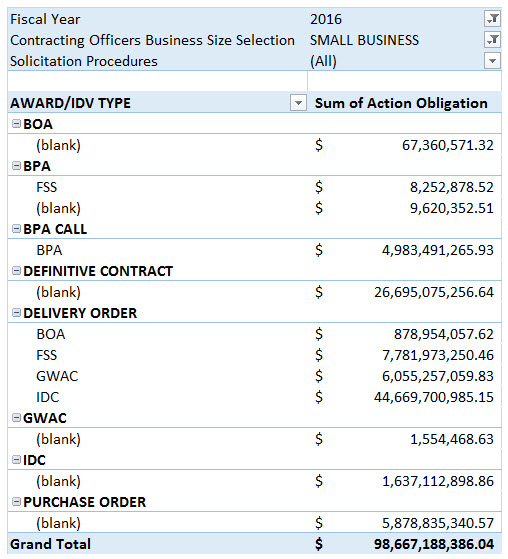 Here’s what this tells you. the Federal Supply Schedule accounts for nearly $8B in obligations made to small business concerns when each company received $500K or more in FY2016 obligations via this contract type. You’ll note that Indefinite Delivery Contracts (IDCs, better known as IDIQs which is actually 1 of 3 types of IDCs) represents nearly 50% of these obligations. Half of the IDV obligations resulted from single award buys versus multiple award buys. Knowing this and assuming at least some of those buys are for what you sell, how would that impact your teaming strategy?

If a better understanding of federal agency ‘Awards and IDVs’ is something that would assist you in seeing the opportunity landscape more clearly, check out our e-course ‘What You Don’t Know (About Codes and Contracts) Can Hurt You!‘ available in our B2G Essentials™ online classroom.

One (is the Loneliest Number)…

But it’s also getting the bulk of federal fiscal dollars when it comes to small business. Of the obligations going to small business concerns (based on the criteria of the query) 60% went to a contract or contract vehicle where ‘Multiple Award Fair Opportunity‘ was not a factor. The ‘S’ represents obligations to single award IDVs and the blank represents awards made to single award contract vehicles (on initial award or as a modification to the initial award versus as a separate task or delivery order) and standalone contracts which are inherently single award.

Small Business Impact (by the Numbers)

Here’s where we take a look at how many small businesses were on the receiving end of these obligations based on the Award/IDV Type and some of the Solicitations Procedures. Why? It speaks to the level of effort required by Government and Industry and the overall size of the types of opportunities. Additionally, it also indicates how the communities supported in part or largely by the success of small businesses benefit as well. This is always a concern for Commerce agencies at the state level and the regional and county-based economic development organizations.

Solicitation Procedures are the methods agencies use to publish solicitations and very much dictate if you can see or respond to specific requirements. For example, when you see ‘Subject to Multiple Award Fair Opportunity’ listed, it indicates only the companies part of the pool of companies awarded a certain vehicle will have an opportunity to respond to those solicitations. Here’s a look at the economic impact on small businesses during FY16, based on a few of the methods agencies leveraged when soliciting offers and quotes.

In addition to those tangible ‘cost of acquiring business’ factors (we call it C.A.B. Fare!) Simplified Acquisitions touched 75% of the number of companies on the multiple award vehicles (3.725 vs 4,895) with 5 times fewer dollars ($8.5B versus $39.5B) and a lower cost of entry and overall C.A.B. Fare. I’m not saying forsake hunting license opportunities (that would be silly), but expand your awareness of how agencies do business based on what you sell and to whom you sell it.

Obviously, this information is the proverbial ‘tip of the iceberg’ when it comes to truly vetting opportunity and the angle of approach you use to achieve desired results. One takeaway is that the chatter on the street is not always what actually occurs. The ability to validate what you hear is not difficult nor time consuming if you apply fundamental processes to finding and winning federal contracts and subcontracts. I hope your 2017 has started off as wonderfully in life and business as mine has!

What Is Marketing Automation?

7 Ways To Be More Attractive To Business Lenders

To Be Competitive You Need To Hire The Right People